Types and Sources of Air Pollution

Introduction
Air pollution is defined as the presence of any particle or gas found in the air that is not part of the original composition. Air pollution is a change in the physical, chemical, and biological characteristics of the air surrounding us. The substances that cause air pollution are called air pollutants, and they may be in the form of a gas, liquid, or solid. 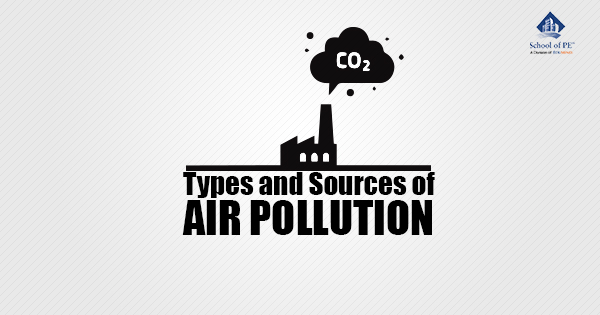 Air pollutants are transboundary in nature as they travel and affect areas far away from their point of origin. Air pollution causes adverse effects on humans and other living organisms. Our PE Environmental exam review course thoroughly reviews the types and sources of air pollution for those preparing for the PE Environmental exam.
Air Quality Index
Air quality index (AQI) indicates whether pollutant levels in the air may cause health concerns. AQI ranges from 0 to 500, with a higher number meaning a lower air quality.

The table below provides the AQI limits for human health.

The common air pollutants are discussed below:
· Carbon Monoxide - Carbon monoxide is a colorless, odorless gas. Carbon monoxide can be present in car exhaust and smoke. Carbon monoxide deprives humans of their oxygen supply, which causes headaches, fatigue, impaired vision, and even death.
· Sulfur Dioxide - Sulfur dioxide is produced when coal and fuel oils are burned and is also present in power plant exhaust. Exposure to sulfur dioxide narrows the airways in the respiratory system, which causes wheezing and shortness of breath.
· Nitrogen Dioxide - Nitrogen dioxide is both a primary and secondary air pollutant. Nitrogen dioxide is created when nitrogen reacts with oxygen in the atmosphere. Nitrogen dioxide can cause respiratory infections and other respiratory problems.
· Particulate Matter - Particulate matter contains particles of different sizes that are released into the atmosphere from various sources, including fossil fuels, dust, smoke, and fog. Particulate matter can accumulate in the respiratory system, which can aggravate the heart and lungs and increase the risk of respiratory infections.
· Ground-Level Ozone – Ground-level ozone is formed from automobile, power, and chemical plant exhausts. Ground-level ozone irritates the respiratory system and causes asthma by reducing lung function.
· Smog - Smog is the combination of gases with water vapor and dust and forms when heat and sunlight react with gases, which is known as photochemical smog.
By School of PE June 08, 2017 02:08