The Conduction Process and its Importance in Mechanical Engineering Applications

Definition of Conduction
Conduction is the transfer of thermal energy that does not have any flow of material medium and is the main process by which thermal energy is transferred from one solid to another. Our PE Mechanical course reviews the physical properties of heat. 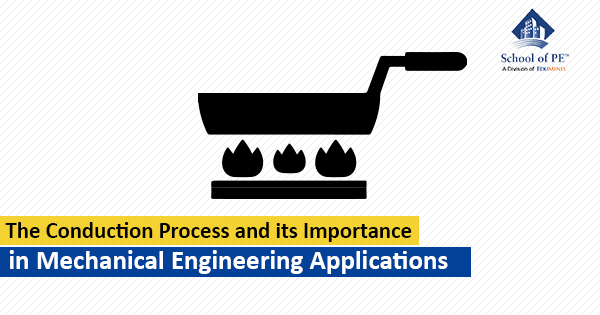 Importance of Heat Transfer Conduction
· Sticking a metal pole into a fire is an example of heat transfer conduction. Particles at the heated end vibrate vigorously. They collide with the neighboring particles and transfer their energy. Eventually, the particles at the cooler end are set into vigorous vibration, which causes the entire metal pole to become hot.
Types of conduction
There are two types of conduction:
1)Molecular vibration
2)Free electron diffusion
Molecular Vibration
· When heat is supplied to one end of an object, the molecules at that end start to vibrate vigorously. During this process, they bump into their neighboring molecules, which transfers some energy. The receiving neighbor molecule gains energy and starts to vibrate more vigorously. The cycle continues.

Free Electron Diffusion
· This form of conduction takes place only in metals because only metals have free electrons. Electrons are freed from a molecule when heat is applied, which forces the electrons to travel toward the colder end of the metal. At the colder end, the electrons collide into many molecules, and therefore, pass energy to the molecules at the other side.
Conduction in Metals
· In solids, thermal energy is transferred through the vibration and collision of particles. However, in metals, due to the presence of free electrons, thermal energy is spread through electron diffusion. Electrons gain kinetic energy and move rapidly and collide with the atoms in the cooler parts of the metal to pass on their energy.

The process of conduction in metals is important for engineers to understand when preparing to pass the PE Mechanical exam.
Fourier’s Law of Heat Conduction
The law of heat conduction, or Fourier’s law, states that the time rate of the heat transfer through the material is proportional to the negative gradient in the temperature and to the area.
Q = -kA(dT/dx)
‘Q’ - heat flow rate by conduction (W)
‘k’ - thermal conductivity of body material (W m-1 K-1)
‘A’- cross-sectional area normal to direction of heat flow (m2) and ‘dT/dx’ is the temperature gradient (k-m-1)
· The negative sign in Fourier’s equation indicates that the heat flow is in the direction of negative gradient temperature, which makes the heat flow positive
· The thermal conductivity “k” refers to the transport properties
· Thermal conductivity “k” provides indication of the rate at which heat energy is transferred through the medium by the conduction process
Applications of Conduction Phenomena in Engineering
· Mechanical Engineering Equipment
· Home Appliances
· Boilers
By School of PE June 14, 2017 03:00