School of PE offers review courses for FE , PE and SE exams. Take advantage of our early registration discounts up to $300.

My Personal Experience in Preparing for the CA Seismic Exam

By Erin Kelly, P.E.
My personal experience in preparing for the CA Seismic exam was a really rocky road. I hope that by sharing some of the lessons I learned along the way, you’ll have an easier time than I did.
I started this journey to licensure by taking (and luckily passing) the national P.E. exam in New York state. At the time, I wasn’t sure if I’d be moving to California, so I decided to take the exam in New York, where I was living at the time. After moving to California, I had to reapply and take the state-specific exams in order to be fully licensed there.
Lesson #1: The California state-specific exams are offered on a rolling basis and you MUST take the test in the quarter after you are accepted to do so.
I had been working in California for nearly a year when I decided it was time to apply for the state-specific exams. It was April, so I figured I would have until late October to take the test, based on the schedule I was used to for the national exam. However, when my application was accepted in June, I found out that I would have to take both the Seismic and Surveying exams between July 1 and September 30.
I was not prepared for this change in schedule. I had just started a new job, my boyfriend had just broken his leg, we had summer travel plans, and I had just committed to presenting at a conference in Europe for work in mid-September. There was NO WAY I was going to be able to study for and pass these tests.
I applied to defer to the following quarter, and the board said no. So, in the end of July I accepted that I would try to study and pass these exams.
Lesson #2: Studying for the Seismic P.E. exam requires a different type of studying than that of the national P.E. exam.
The national exam varies from this one in that it is both very broad and very long. For me, 40 problems in four hours meant that I had ample time to look things up during the exam. I also found, particularly for the morning section of the national exam, that a lot of the questions are definition based.
The seismic exam is very different—it’s fast paced and most of the questions are calculation based. You really need to both understand the material thoroughly and be prepared with tabs and tables, etc..., in your reference materials.
Unfortunately, I didn’t know that at the time, so I modeled my studying around what I had done for the national exam, as that had given me a passing result before. I obtained a copy of The Seismic Design Review Handbook by Hiner (which I highly recommend) and skimmed it, cover to cover. I completed all the multiple-choice questions and felt pretty confident. When it came to the more calculation-based problems, though, I felt pretty uncomfortable. But, based on the national test, I figured that was probably an OK way to feel. I sat for the test and, as you may have predicted, the preparation I had done was not enough.
Lesson #3: Studying and learning can be so rewarding—for the test and beyond.
My second time through I was not messing around. I paid for a course from School of P.E., I studied the review book much more intensely than I did the first time. I also borrowed a copy of the SEAOC Seismic Design Manual Volume 1 from my work and completed every problem in that book, too. Surprisingly, I started to enjoy the studying and learning process! Sure, studying on nights and weekends was hard but I was truly learning the materials, and it was having the adding benefit of making me better at my job. It seemed to me that it was truly a good thing for me to have failed and been given the opportunity to try harder the second time.
Lesson #4: Results are released (typically) on the 10th of the month after you take the test. 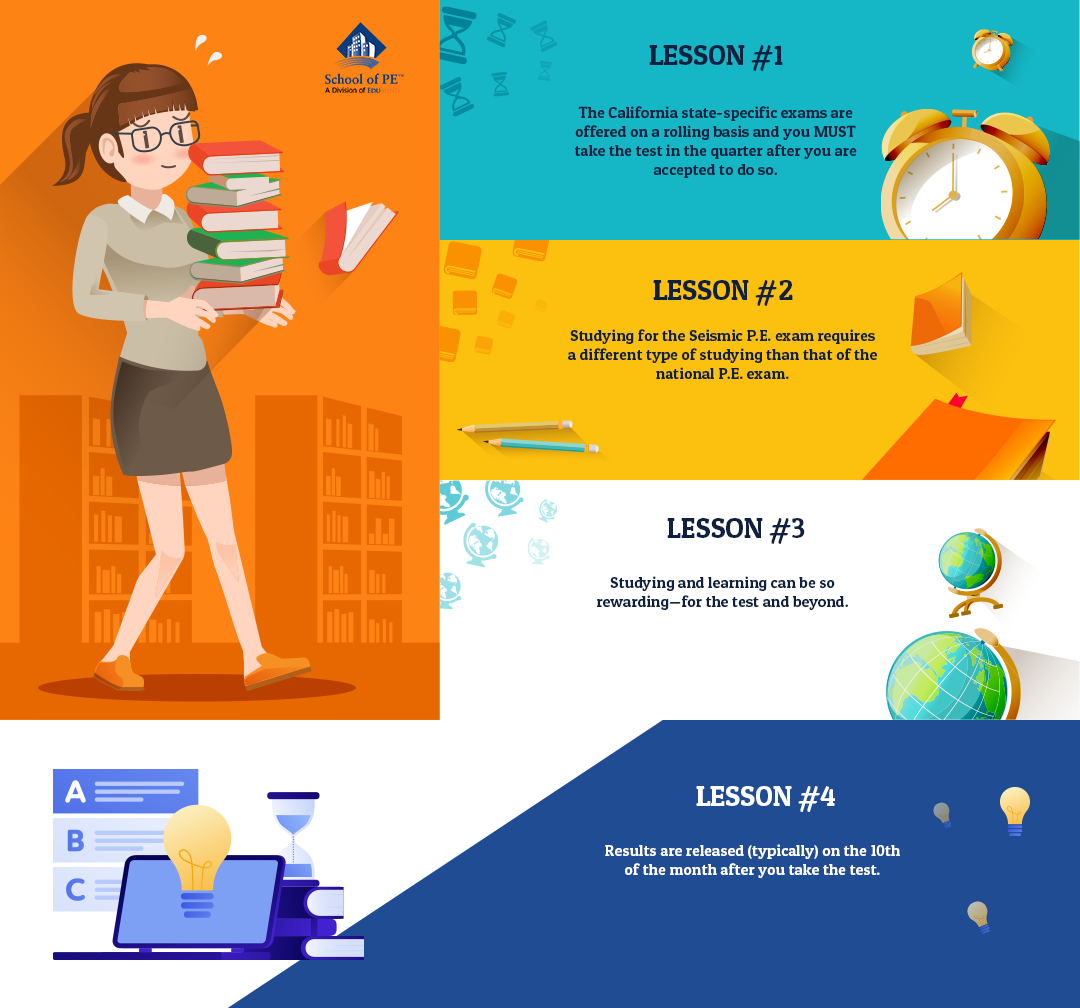 The last error I made (although this was is ultimately minor and had no lasting effect) was taking the test at the start of a month. I took the seismic exam on June 6 and didn’t find out until July 10 that I had passed. That felt like an eternity. So, my final piece of advice to you is to take the exam at the end of the month so you can dramatically reduce the waiting period.
Best of luck! I hope you can learn from my experiences and maybe even enjoy the journey 😊
By School of PE May 18, 2020 09:01