NCEES has added a January date for the PE Civil exam. Rest assured that you are covered by our COVID-19 Risk-Free Enrollment. Learn More

A Chronology of Improvements in the Building Code for Seismic Design

By Erin Kelly, P.E.
Considering the several chapters in the latest ASCE 7 that are devoted exclusively to seismic provisions, along with the sheer breadth of the exam you’re currently preparing for, it may surprise you to know that the first structural seismic provisions in the United States weren’t published until 1959. Not only that, but after the so-called “Blue Book” was published in 1959, the guidance remained largely unchanged until after the 1971 San Fernando Earthquake.
Since then, the Uniform Building Code (UBC) and, more recently, the International Building Code (IBC), have been repeatedly updated to reflect new research, typically spurred by common failure mechanisms observed after a major earthquake.
Below we’ll cover some of the major earthquakes, the damage observed, and the developments in the subsequent codes. I hope this serves to provide some context to the seismic code provisions and sheds some light on the importance of seismic engineering.
The 1933 Long Beach Earthquake
The 1933 Long Beach Earthquake exposed the vulnerability of unreinforced masonry (URM) structures. According to the Federal Emergency Management Agency (FEMA), 86% of the URM structures in the city of Long Beach suffered significant structural damage or collapse as a result of this earthquake. This observed damage spurred the adoption of the Field Act of 1933 which, among other things, specified specific design forces for important public structures such as schools.
The “Blue Book” (1959)
In 1959, the Structural Engineers Association of California (SEAOC) published the first edition of the Recommended Lateral Force Requirements and Commentary (also known as the “Blue Book”), to standardize and share the latest seismic design knowledge. These provisions were later adopted into the 1961 UBC.
One development in seismic performance that was adopted during this period was proper out-of-plane anchorage at the connection of wood framed members and concrete foundation elements.
The 1971 San Fernando Earthquake
In 1971, the San Fernando Valley (near Los Angeles) experienced a 6.5 magnitude earthquake, which killed about 60 people.
Common damage observed included the failure of roof-to-wall anchorage in concrete tilt-up structures, which relied on a bolted wood ledger acting in cross-grain bending. This connection type was found to be inadequate and an update was nearly immediately made to the 1973 UBC.
As more research was done after the earthquake, other provisions were written and added to the 1976 UBC. These included the first provisions on ductile detailing for concrete structures, increased design forces for wall anchorage in concrete tilt-up structures, and a change in the calculation approach to determine the shear capacity of wood-framed shear walls.
Continued Research through the 1980s
While there were no notable earthquakes that spurred code upgrades in the early 1980s, the 1982 and 1988 UBC editions included major improvements in seismic provisions and lateral force resistance. These improvements included stricter building drift limits, increased provisions for wall anchorage, and increased detailing for ductility in concrete and masonry shear walls.
The 1994 Northridge Earthquake
In 1994, the northern region of Los Angeles experienced another major earthquake—this one with a magnitude of 6.7, killing 57 people.
The most notable damage observed following the Northridge Earthquake was in the form of failure at beam-column connections in steel moment frames. It was determined that the welded connections were inadequate in a major seismic event. Several improvements were developed with regard to welding technologies including an increase in weld-metal toughness requirements, the removal of backing bars, and the regulation of the workmanship and welding quality. The building code also moved away from using a prescriptive detail and moved toward performance-based criteria.
Present and Future Codes
Research continued following the 1994 Northridge earthquake, and several more improvements were adopted in to the 1997 UBC. The 1997 UBC is generally considered the “benchmark” building code for several building types, indicating that the seismic provisions developed by the adoption of this building code were sufficient for the life safety limit state. 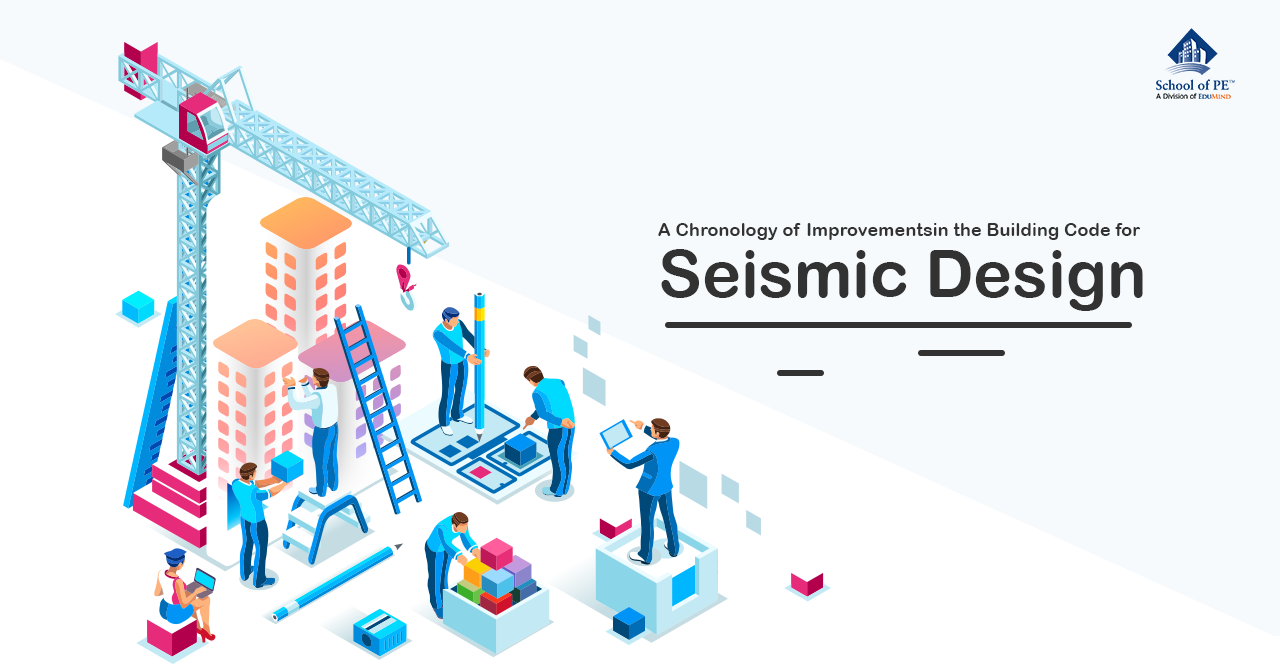 The building code will continue to evolve, and will no doubt become even longer as it does. I hope this gave some context to some of the major upgrades over the last 100 years and will get you up to speed with some of the lessons learned.
References:
https://www.fema.gov/media-library-data/20130726-1442-20490-5595/fema_313.pdf
https://en.wikipedia.org/wiki/1971_San_Fernando_earthquake
https://en.wikipedia.org/wiki/1994_Northridge_earthquake
https://global.ctbuh.org/resources/papers/download/1664-developments-in-us-building-codes-for-seismic-resistant-steel-buildings.pdf
By School of PE May 25, 2020 15:00