Soil Erosion: Its Causes and Effects

Introduction
Soil is considered to be one of the most valuable natural resources. Soil is a combination of weathered rock, decayed organic matter, mineral fragments, water, and air. As degraded soil becomes loose and weak, it loses the ability to absorb and retain water, which leads to soil erosion. Ellison (1944) defines soil erosion as the process of detachment and transport of soil particles by erosive agents. 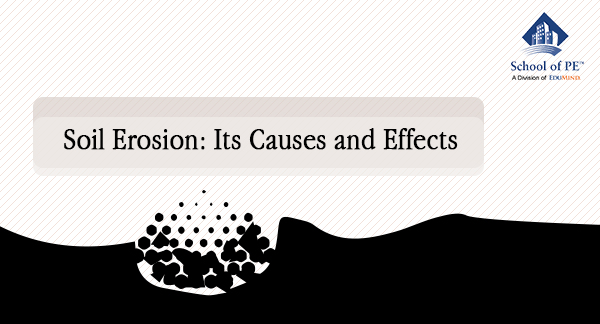 Soil Erosion Factors
Factors that contribute to erosion include climate, topography, soil characteristics, vegetation, velocity of winds, rainfall intensity, and duration. Knowing the factors that cause erosion assists in identifying the source of erosion and developing a plan to control it.
Erosion is classified into two major categories: geological erosion and man-made erosion. Geological erosion occurs naturally, while man-made erosion arises when humans alter the land. Soil classification and soil erosion factors are discussed in our FE Environmental exam review course to recap the fundamentals and factors of soil erosion.
Agents of Soil Erosion 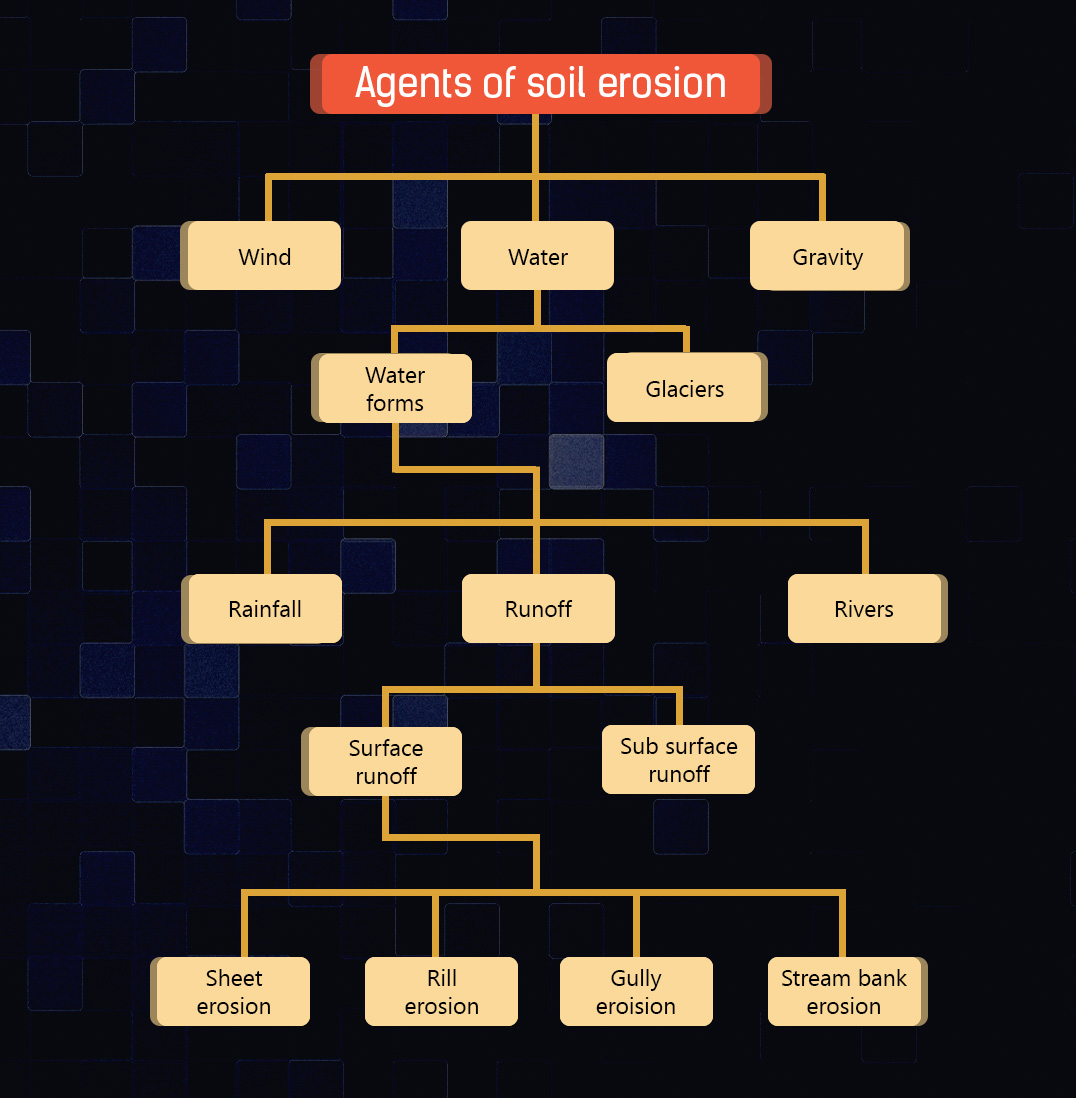 Soil Erosion by Water
When a raindrop hits the soil, it destroys the granulation of soil (compaction) and causes a disruption of the soil surface (detachment). The exposed soil particles are dislodged, splashed into the air, and suspended in the rainwater. The rainwater that runs from a slope during heavy rains is referred to as a runoff. This runoff carries away soil particles and nutrient elements along with it.
There are three main types of erosion that occur due to water:

· Sheet erosion is the uniform movement of a thin layer of soil from unprotected land.

· Gully erosion evolves from rill erosion over time. When runoff is in a single wide and deep channel, it is known as gully erosion. A gully is defined as a scoured-out area that is not crossable with tillage and grading equipment.
Soil erosion by water is thoroughly discussed in our FE Environmental exam refresher course.
Wind Erosion
Wind erosion occurs when land that is bare of vegetation is exposed to high-velocity winds. Soil movement is initiated when the forces of wind are exerted against the surface of the ground.
For each soil type and surface condition, there is a minimum velocity required to move soil particles; this concept is known as threshold velocity. When wind threshold velocity overcomes the cohesive and gravitational forces of the soil particles, wind can move soil and carry it away in suspension.
Other Forms of Soil Erosion
Gravity erosion is the transfer of rock and soil down a slope due to the direct action of gravity; gravity erosion can cause a mass movement of soil, ice, and rock, which leads to landslides, avalanches, and rock fall.
Glacier erosion occurs when a huge mass of ice slowly moves over the land. Glaciers erode the earth’s surface and wear down, pick up, and carry sediments that vary in size.
Sedimentation control methods and the effects of soil erosion are important concepts to understand for the FE Environmental exam.
By School of PE May 18, 2017 00:52