Effects of Air Pollution on the Environment

Introduction
Air pollution occurs when harmful gases, dust, or smoke enters the atmosphere and has a negative impact on plants, animals, and/or humans. Air pollution is the deadliest form of pollution, killing millions of people each year. The World Health Organization reports that more than 92% of the world’s population lives where air pollution exceeds safe limits. Among all other pollutants, air pollution has proven to be a major concern throughout the world. Air pollution and its impact on the environment creates an increasing demand for environmental engineers with their PE license. 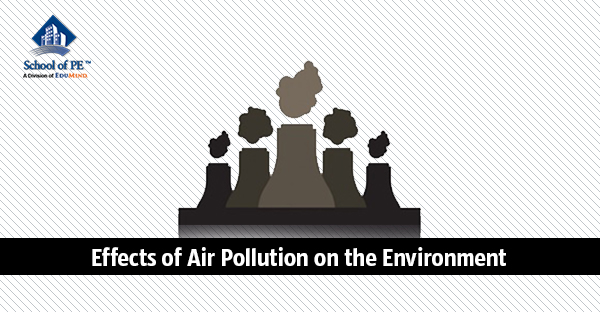 Air Pollution Hazards
Air pollution hazards are thoroughly discussed in our PE Environmental review courses. Air pollution can cause many problems including:
1)Acid rain
2)Eutrophication
3)Haze
4)Negative effects on wildlife
5)Ozone depletion
6)Crop and forest damage
7)Global climate change
Acid Rain
Acid rain is formed when sulfur dioxide and nitrogen oxide in the atmosphere is mixed with rainwater as a weak sulfuric and nitric acid. Acid rain can damage crops, plants, and aquatic life and is even capable of damaging structures.
Eutrophication
Eutrophication is a condition created by using excessive fertilizers and pesticides that drain into bodies of water. Nutrients, such as nitrogen, stimulate blooms of algae, which in turn endangers aquatic life.
Haze
Haze is formed when sunlight encounters suspended pollutant particles in the air. Haze obstructs our vision, clarity, color, texture, and form of what we visualize in the real world.
Negative Effects on Wildlife
Like humans, wild animals are also developing health problems as they are exposed to toxic air. Air toxins contribute to birth defects, reproductive failure, and disease in wild animals and aquatic ecosystems.
Ozone Depletion
Ozone is a gas that is present in the earth's upper atmosphere, the stratosphere. Ozone forms a layer that protects life on Earth from the sun's harmful ultraviolet (UV) rays. Ozone is gradually being destroyed due to ozone-depleting substances being released into the atmosphere. The thinning of the protective ozone layer is causing higher amounts of UV radiation to reach the earth, leading to more cases of skin cancer, cataracts, and impaired immune systems. UV rays also damage crops and lead to reduced yields.
Crop and Forest Damage
Air pollution damages crops and trees in many ways. Air pollution reduces growth and the survivability of plant seedlings and increases plant susceptibility to disease, pests, and other environmental stresses, such as harsh weather.
Global Climate Change
The earth's atmosphere is a delicate balance of naturally occurring gases that trap excessive heat from the sun. This greenhouse effect protects and maintains a stable temperature on the planet. Throughout time, humans have disturbed this natural balance by producing greenhouse gases, including carbon dioxide and methane. Thus, the earth's atmosphere is trapping more of the sun's heat, leading to the average temperature to rise. This phenomenon is known as “global warming.” Global warming has significant impacts on human health, agriculture, water resources, forests, wildlife, and coastal areas.
Air pollution and its potential impacts on the environment are fully reviewed in our PE Environmental refresher course.
By School of PE April 24, 2017 03:51