Petroleum Engineering: An Exploration of Job and Industry Trends

Petroleum is an essential aspect to everyday life with oil being sourced to transportation, industrial and residential sectors. Even with renewable energy emerging and becoming more prominent in today’s society, the oil industry is expected to grow. Petroleum continues to be the most widely used energy source in the United States. In 2017, 36.2 quadrillion Btu of petroleum were used, followed by 28 quadrillion Btu of natural gas, 13.9 quadrillion Btu of coal, 11 quadrillion Btu of renewable energy (biofuels), and 8.4 quadrillion Btu of nuclear electric power.i
The increase of petroleum popularity may be because new renewable energy technology has not advanced enough to provide adequate energy for an ever-growing population and city infrastructure. For example, the International Energy Agency (IEA) predicts that the global demand of oil will significantly increase by 2040. In 2010, the global demand per day was averaged at 86 million barrels. IEA forecasts an average of 105 million barrels of oil per day being used in 2040, which is a 22% increase in 30 years.ii
The growth of the petroleum industry is evident when evaluating petroleum engineering jobs as well as a higher demand of licensed professional petroleum engineers. In fact, the number of petroleum engineering jobs are expected to increase 15% by 2026, which is much greater than the average job growth in other industries.iii
The number of examinees who have taken NCEES’ PE Petroleum exam has significantly increased over the years. Only 17 examinees took the licensing exam in 2001, and 187 examinees took the exam in 2017. With the consistent increase of petroleum engineering jobs, the PE Petroleum exam may soon reach the popularity level of the PE Control Systems and the PE Chemical exams.iv 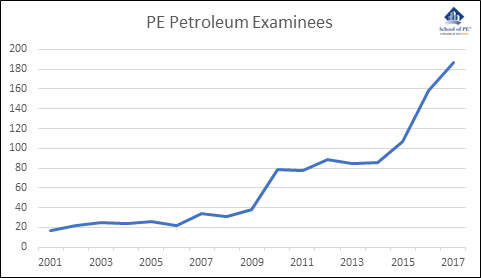 To accommodate the increasing popularity of the PE Petroleum licensing exam, School of PE offers a PE Petroleum exam review course for those who are interested in pursuing a career in the industry. The course provides 60 hours of lectures as well as practice problems.
Pursuing a career in a rapidly growing industry has many perks, such as job security, career advancements, and salary. Secure a career in petroleum engineering by getting licensed. With School of PE, you can prepare, practice, and pass. It’s that easy!
References